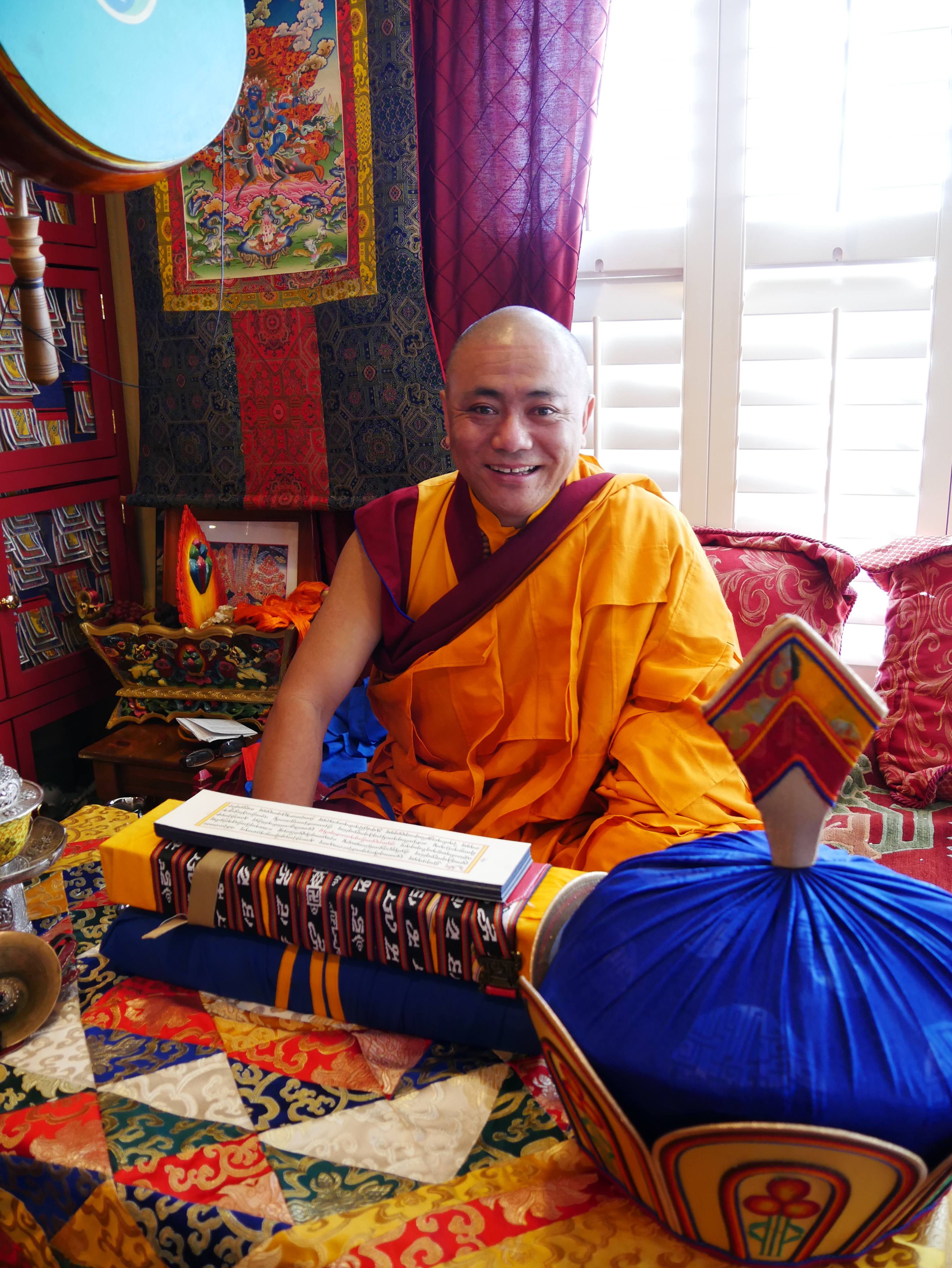 Geshe Yungdrung Gyaltsen Phagontsang was born in 1967 in the small village of Khyungpo Teng-chen, a remote area in the Kham region of Eastern Tibet.

His father was Rinchen Palden and his mother was Adho Palyang. They raised a family of three brothers and five sisters with the help of two uncles.

In 1975, he began attending the local village school to learn the reading and writing of the Tibetan language along with other basic subjects.

In 1985, Geshe Yungdrung G. Phagontsang engaged himself in the Dzogchen preliminary practice of Drenpa Namkha at the Bön monastery known Thongdrol Ritroe in Khyungpo with H.E. Meton Lhundrup Gyaltsen Rinpoche.

Meton Lhundup Gyaltsen became the first Dzogchen master of Geshe Yungdrung Gyaltsen and he was a descendant of Meton Nyima Gyaltsen, a Zhangzhung Nyangyu lineage master and the founder of Thongdrol Ritroe Monastery.

In 1986, Geshe Yungdrung engaged the practice of Ngöndro Kalung Gyatso, an extensive teaching on the preliminary practice by Shardza Rinpoche; and subsequently received the introduction to Natural State, and other religious rituals from H.E. Sherab Gelek Rinpoche, the abbot of Tengchen Monastery of Khyungpo. He was Geshe-la’s second Dzogchen master. This monastery has since been rebuilt after being destroyed during the Chinese occupation.

Later in 1986, Geshe Yungdrung met H. E. Yongdzin Lopon Tenzin Namdak Rinpoche who was visiting his mother at their family home in Tibet. He made a commitment to follow H. E. Yongdzin Rinpoche.

As a result of his decision, in 1987 Geshe Yungdrung left his village home to go to Yungdrung Ling Monastery, one of the main Bön monasteries in central Tibet, dedicated to Bon dialectic studies. It was there where he took his monk vows from H.E. Lopon Kunsang Lodoe Rinpoche and started the formal study and practice of sutra and religious philosophy. During his time at the monastery, he also visited Tashi Menri Monastery, an important Bön monastic seats in central Tibet.

In the second part of 1987, Geshe Yungdrung escaped from Tibet into Nepal. He sought refuge at Triten Norbutse monastery in Kathmandu, which was just being newly built. While there he took the teaching on dulwa (monastic discipline) from H. E. Yongdzin Tenzin Namdak Rinpoche and practiced with him for several months.

Later in 1987, Geshe Yungdrung traveled to Menri Monastery in Dolanji, India to begin his studies at the dialectic school for his Geshe degree.  This course of study consists of the Bön philosophical system of Sutra, Tantra, Dzogchen and the general Tibetan sciences of poetry, astrology, cosmology, geomancy, and logic. It also included many special initiations given by H. H. Menri Trizin Rinpoche and H. E. Yongdzin Tenzin Namdak Rinpoche.

While he was studying at Menri Monastery, Geshe-la also taught Bön Philosophy and others subjects to some classes of junior monks in the monastery until he graduated as Geshe.

In first Tibetan lunar month, 1996, Geshe Yungdrung had successfully passed all of his Geshe exams and was awarded the Geshe degree at Menri Monastery.

After completion of his studies, on the request of the Abbot of Tengchen monastery in Tibet in 1996, he was appointed by H. H. Menri Trizin Rinpoche and H. E. Yongdzin Tenzin Namdak Rinpoche to become the abbot of Tengchen monastery (Khyungkar Yungdrung Tengye Ling) in Tibet. He then traveled to Tibet through Nepal only to learn at the border that he was permanently denied any entry into Tibet by the Chinese authorities.

As a result, he remained to Nepal, at Triten Norbutse monastery, where he reimmersed himself in Dzogchen practices along with the teaching of the younger monks.  During this time, he also served, for three years, as the treasurer of the monastery. At Triten Norbutse he received and practice various teachings of Tantra and Dzogchen and completed the 108-days practice retreat of Tummo, an intensive training with the subtle body, energy, and mind to realize the blissful and liberated state of body speech and mind.

During this year, Geshe Yungdrung was elected as the representative for the Bön tradition to the Tibetan government-in-exile based in Dharamsala, India. He remained in Dharamsala for four years, traveling internationally for meetings with Tibetans for government-in-exile related activities. After five years in this position, he was reelected for a second term. During this time he remained in Nepal at Triten Norbutse monastery while giving lectures to Tibetan settlements in Nepal, India and various other foreign countries.

From 2009 – 2010, Geshe Yungdrung traveled across the United States and Europe offering a series of lectures to Tibetans about their native Tibetan history, art and culture. He also assisted H.H. Menri Trizin Rinpoche during his visits at Shenten Dargye Ling in France.

In 2011, Geshe Yungdrung moved to the Denver, Colorado, to continue his English language studies. He presently teaches Tibetan history, culture and religion, and Bön teachings and religious rituals to local sangha members.