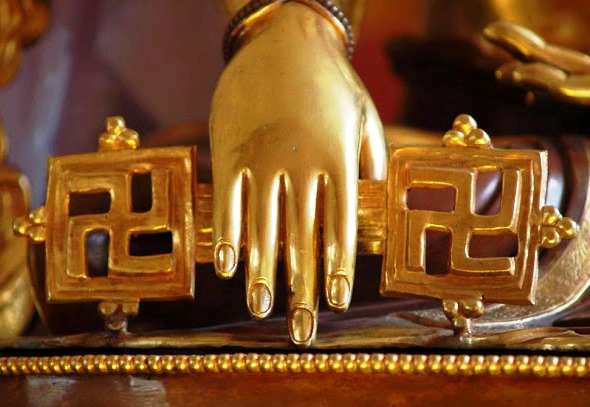 Bön is the native spiritual and cultural tradition of Tibet and the Himalayan borderlands. Its religious teachings have come down from teacher to student, generation to generation, in an unbroken lineage for thousands of years. Since prehistoric times, Bön has influenced the religious and cultural development of numerous peoples in Central Asia.

Today, scholars and practitioners from around the world, feel drawn to Bön teachings due to the richness of profound ancient knowledge and its unique spiritual practices for awakening the individual to their real nature and full meaning of life.

The teachings of Buddha Tönpa Shenrab are called the “Nine Ways of Bön”. They are divided into two main sections, the Bön of Causality and the Bön of Fruition. These two sections encapsulate the full range of secular and spiritual knowledge and a living expression of Tibetan culture. The Bön of Causality contains the instruments for attaining temporal happiness. These teachings are divided into four branches: methods of healthcare, interspecies relations, mechanisms of community defense, and rites for the welfare of the deceased.

The Bön of Fruition contains the instruments for the obtainment of Buddhahood. This sphere of tradition has five branches or vehicles: religious observances for lay people, religious observances for monks, tantra, higher wisdom teachings, and supreme realizations. Until the eighth century, the time of the reign of Tibet’s 38th King, Trisong Deutsan, Bön was the predominant religious culture over an extremely wide area of Asia. Particularly it represents the indigenous source of Tibetan culture, and so H.H. the14th Dalai Lama has emphasized “the importance of preserving the Bön tradition, as representing the indigenous source of Tibetan culture, and acknowledging the major role it has had in shaping Tibet’s unique identity”.

Even after the introduction of Buddhism from India, Bön continued to exert a powerful influence on the Tibetan nation. To this very day, it plays an important role in the language, customs, folklore, medicine, and architecture of Tibet and the surrounding regions.  In particular, Bön occupies a very significant place in the cultural identity of the Great Himalayan Range of Nepal, Sikkim and northwestern India. Along with much of Tibet, these Himalayan regions belonged to a vast ancient Bön kingdom known as Zhang Zhung. Recent discoveries prove that Zhang Zhung kingdom was one of Asia’s major Iron Age civilizations.

The Founder of the Bön Religion

The Buddha Tönpa Shenrab, also known as Shenrab Miwo, was the founder of the Bön religion. Born approximately 16,000 years ago into the ancient kingdom of Tazig, to the west of Tibet, he spread the Bön teachings by traveling and teaching throughout the countryside and performing various rituals. While retrieving his horses, which had been stolen, he entered the kingdom of Zhang Zhung in western Tibet and gave the first Bon teachings in that region. The traditional accounts tell of one thousand and eight Buddhas appearing on earth in this time cycle. Of these, Tönpa Shenrab was the eighth. The hagiography of Tönpa Shenrab is preserved in three versions, short, medium and extensive – Dodu, Zermig, and Zidji. The written biography of Tönpa Sherab comprises 15 volumes.

The Scriptures of the Bön

The Bön scriptures are traditionally divided into two major works:

Today several world universities have both major Bön texts in their permanent library collections. Several international academic digital networks also make both of these major works of the Bön religion available worldwide to scholars and practitioners through the development of catalogs, digitalization, and translations.

The Purpose of the Scriptures

“As for the essence of the teachings, having relied upon proper conduct and practice, there will arise qualities of a virtuous aspect and these will become the means for exhausting the obscurations which afflict the individual”.

The Bön scriptures offer, like the medical arts, “a proper conduct and practice” as a methodical cure against all obscurations and delusions, whether they are physical, emotional, intellectual or spiritual.

The scriptures recount how the “wisdom” of the Buddha Tönpa Shenrab observed the obscurations and suffering in the world and so he decided to be born on earth in order to help all living beings. His “skillful means” against suffering were his teachings about ”enlightenment”, and so all the scriptures have as their meaning his instructions for liberation from suffering.

All suffering is caused by ignorance. It obscures the natural state of the mind, leading to the appearance of negative emotions such as hatred, desire, jealousy and pride created by grasping at the self. So the central motivation of the Bönpos is the “Thought of Enlightenment” (changchub sem), or to eliminate the suffering of all living beings. Buddha Tönpa Shenrab taught enlightenment is possible for all beings because Buddha-Nature is present within all sentient beings.

Just as the darkness of night fades away as the light of the morning sun penetrates the open space, so also the obscurations of the mind dissolve when the clear discerning “awareness” (rigpa), which dwells in the endless expanse of the natural state of mind, is realized.

The Wheel of Existence: the Ways of Samsara

The ways of samsara all lead to obscurations, delusion, and suffering. As a result of our negative actions, all of us continuously transmigrates through countless reincarnations experiencing the pain of birth, old age, illness, and death. 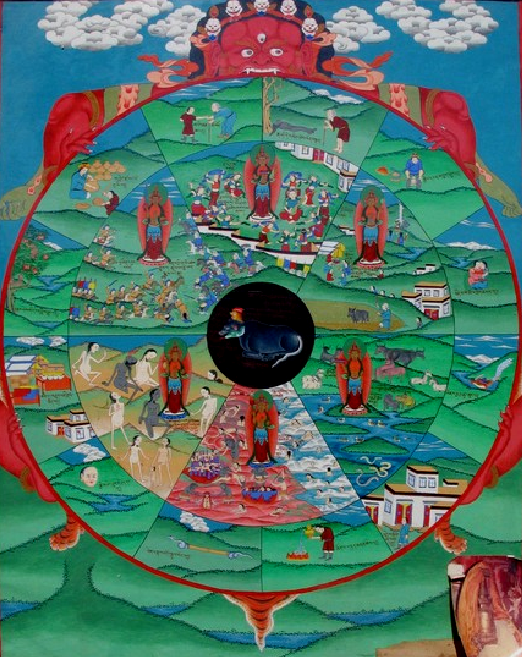 However, the Buddha Tönpa Shenrab teaches that the apparent “beginning” of every new life is merely a configuration of the karmic traces (bagchag) from our past lives. It is but the result of the positive and negative imprints, earlier acts we have made upon our mind.

An understanding of the “law of karma” (le-drey), in that all our acts of body, speech, and mind, either positive and negative, are but the causes which affect our next rebirth.

It is, therefore, the real gateway to all the ways of Bön, which are concrete, in that positive acts reduce suffering.

The Wheel of the Teaching: the Nine Ways of Bön

The teachings of Buddha Tönpa Shenrab are called the “Nine Ways of Bön”. They are divided into two main sections, the Bön of Causality and the Bön of Fruition. These two sections encapsulate the full range of secular and spiritual knowledge and are also a living expression of Tibetan culture. 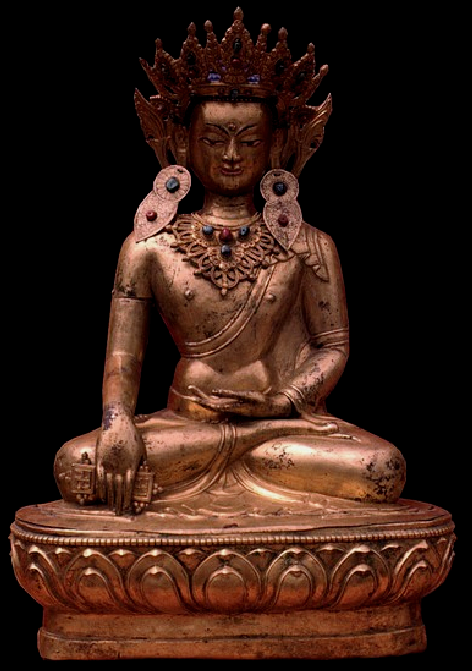 The Bön of Causality contains the instruments for attaining temporal happiness. These teachings are divided into four branches: methods of healthcare, interspecies relations, mechanisms of community defense and rites for the welfare of the deceased.

The Bön of Fruition contains the instruments for the obtainment of Buddhahood. This sphere of tradition has five branches or vehicles: religious observances for lay people, religious observances for monks, tantra, higher wisdom teachings, and supreme realizations.
Buddha Tönpa Shenrab gave many teachings on different levels according to the capacity of individual beings.

All the teachings are transmitted in “Nine Successive Ways of Bön” as follows:

1. Chashen thegpa, “the Way of Prediction”. This includes the teachings of divination, astrology, misfortune-adverting rituals and medical practices. According to Bön, these are transformed into a spiritual path to enlightenment if practiced on the basis of the compassion towards all beings and the aspiration to attain enlightenment for their sake. Medicine is viewed as being inseparable from the religious path and also includes practices such as veneration of the healing deities.2. Nangshen thegpa, “the Way of Appearances”. This expounds the origin and nature of gods and demons living in this world and their inter-species relations as well as various methods of exorcism and offerings of symbolic ransoms. This includes rituals for element and environment purification and prosperity.

3. Trulshen thegpa, “the Way of Magical Apparition”. This teaches mechanisms of community defense, explains rites for disposing of adverse power, use of mantras, mudras (ritual hand gestures) and meditation on wrathful deities to subjugate, repel, or destroy malicious forces and negative energies.

4. Sishen thegpa, “the Way of Existence”. Rites for the welfare of the deceased covers, practices that are to be performed at death, including an explanation of how to identify which of the eighty-one kinds of deaths has occurred so that one can perform the appropriate practice.

THE FIVE WAYS OF BÖN OF FRUITION – Contains the essential practices leading to the ultimate goal, the achievement of Buddhahood

5. Genyen thegpa, “the Way of Virtuous Lay Practitioners”. This teaches the code of the ten virtuous actions of body, speech, and mind, such as avoiding killing, stealing, and sexual misconduct, and the practice of such meritorious activities as circumambulating and honoring stupas.6. Drangsong thegpa, “the Way of Sages”. Drangsong “ Sage” is the Bön term for a fully ordained monk, and this section deals with monastic discipline. This also includes teaching on emptiness, developing the “Thought of Enlightenment”, Practicing the Ten Perfection, the Five Paths and Ten Ground Levels.

7. Akar thegpa, “the Way of Primordial Letter White A”. This consists of Mother Tantra, which teaches the techniques for attaining enlightenment. These include the “generation level” practices of visualizing oneself as a tantric deity in the center of a mandala. There are also the ancillary “completion level” yogic practices, which are based upon a spiritual anatomy of internal winds, channels, and drops within the body.

8. Yeshen thegpa, “the Primordial Vehicle”. This is focused on the master-disciple relationship and on the devotion as the method for attaining enlightenment.

9. Lame thegpa, “the Unsurpassable Way”, or Dzogchen “the Great Perfection”. The highest level of teachings is The Great Perfection (dzogpa chenpo), which neither renounces nor transforms samsara, but allows obscurations to self-liberate themselves by correct insight into their original empty nature. This teaching emphasizes the exploration and stabilizing of the experience of the natural state of the mind to liberate delusions, miseries, and suffering. Here the disciple receives the direct introduction to the ultimate nature of the mind. On the basis of that experience, there are advance and esoteric practices known as Trekchö and Thögel, which includes a 49-day retreat in complete darkness.

Dzogchen teachings are found in the two oldest religious traditions, Bön and Nyingma, and are essentially same in both traditions. The Bön tradition is particularly important for research into the historical origins of Dzogchen because it represents a continuous transmission line from the earliest times. There are three lineages of Dzogchen within the Bön tradition: the A-Tri, the Dzogchen and the Zhang Zhung Nyengyud.